Tool and Other Auditory Friends

I was asked recently why Tool is my favorite band. It’s one of those questions you’re almost annoyed to hear because it’s so incredibly painful to explain. It’s like being asked why I think trees and oceans are pretty.
I should have qualified my previous statement to this person by saying that Tool is usually my favorite band, but I suppose to most straightforward thinkers this wouldn’t make much sense. Either you prefer it above all other possible choices or you don’t, for most people. But I rarely think this way. As an indication, some days I immensely prefer Coldplay to Tool when I feel that surge of inspirational life-energy, usually just after heavy doses of caffeine.
I think most people have dimly lit 90s memories of Tool, of distorted claymation figures zombie-walking about the penumbra of their MTV-charged thoughts to roiling tribal drums and pulsing bass notes. Here’s “Stinkfist,” as a case in point:
The vocalist, Maynard James Keenan, sounds alternately angelic and demonic, changing form quickly or slowly—ecliptic or apocalyptic. I suppose I say that Tool is usually my favorite band because it usually corresponds with my mood. Contrary to popular thought, Tool does not dwell in negativity. Rather, it appeals to highly sensitive people (like muah) who get the thought sniffles when they observed the tragic world around them. In this regard they’re often read analogously to Friedrich Nietzsche, one of my favorite philosophers, in that those with short attention spans often mistakenly accuse them of celebrating nihilism, like the inept, ferret-bearing German dudes from The Big Lebowski. 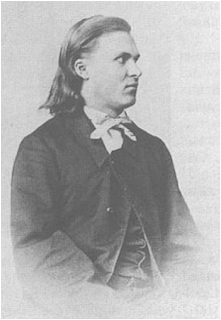 Maybe people think he’s filled with despair because young Nietzsche looks kinda like Viggo from Ghostbusters 2? It looks like his flesh can barely contain the intensity in his skull. Which is why his eyeballs protrude so much.
Music for me has always been about emotional movement –the oceanic rumble of the drums to the predatory bird-screech of strings. But it’s always in some kind of confined space, and it summons a kind of landscape as a result, which, if you pay attention long enough, is actually far from still. Animals move, wind bends the trees, snow coats trees at odd angles. Each visual space has a musical movement of its own, and I seem to summon a unique soundtrack for every piece of scenery I look at. This is probably because I’m naturally visual or because my generation has been programmed to dutifully translate all emotions into cinematic landscapes so we’re more susceptible to commodity fetishism. Either way, visual poetry bubbles about my brain when music hits my ears, like a very distorted, creepier version of a Terence Malick film.

Tool for me will always be an Alaskan landscape during dead winter, the time of year when the sun begins setting absurdly early—3:30 or 4 in the afternoon. As the light dims and the world’s eye slowly crumbles into the dark, snowy sleepiness, I can’t help but think the auditory equivalent would be an overactive and rhythmic primal heartbeat, some symbol of brutal interconnectedness like the irony smell present in the blood of almost everything, the kind of thing that would could, alternately, evoke the loving tenderness of a wolf mother sheltering its cub from the cold or the hungry grizzly breaking the neck of a moose calf and dragging it screaming into the woods. The brutality and the tenderness of nature awakened with one scene or one strong piece of music. That’s Tool to me, and I suppose it explains a lot about the way I am. I appreciate the people and artists who can stare into the abyss but always come back and find the positive in what they saw—how they can learn and grow just as much from tragedy as they do from seeing symbiosis and kindness.

They aren’t afraid to feel, in other words, everything there IS to feel.
Posted by dlashot at 9:19 AM