As an Alaskan, the only natural disasters I’m familiar with and know how to prepare for are earthquakes. Since moving to Oklahoma for a doctoral program, however, I’ve become fascinated by these gargantuan wind tubes that droop out of the sky like demented elephant trunks and make our best-built structures look like sand castles.  Otherwise known as tornadoes.
They’re also, oddly, the only natural disaster that also doubles as a kind of tourist attraction. 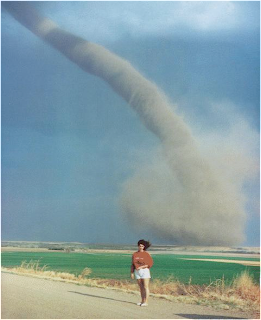 Look Mommy! It likes me! Can we feed it some trailers?
People come to tornado alley and follow storm chasers just for the chance to get a picture with one. I’ve tried to distance myself from the spectacle as much as possible by watching as many scary National Geographic documentaries on the things as possible, but, alas, tornadoes still fascinate and scare me at the same time. And everyone else, it seems.
The fear that these things generate has almost become commodified. It comes in prepackaged “Tornado events,” where it seems every news station around here turns momentarily into Fox News and scares us shitless so we’re motivated enough to get off the couch and go into the basement.
At the same time, a crapload of insane images appear on the TV, daring us not to watch: Power lines floating above storm chasers (who listen to Prodigy while cruising toward debris-churning sky blobs), sturdy houses disintegrating into bits, dead livestock being carried and then dumped piece-by-piece in a field miles later. I almost feel guilty for watching, almost like it’s torture porn. I wanted to sing a phrase from one of my favorite Tool songs: “Vicariously I live while the world dies.”
Anyway, the media and the images and the creepy NOAA weather station voice, which sounds like one of those grunting action movie trailer dudes (Action. Excitement. But it isn’t coming soon to a theater near you, Cleveland County. Get the fuck to shelter.) all impelled me to start freaking out a little. While talking to my dad in Alaska, who was watching the whole thing on CNN, I decided that staying in my shitty apartment complex was a bad idea. I thought that if I can clearly hear my neighbor’s conversations and slap-tastic sexual adventures, there’s no way a tornado wouldn’t make confetti out of this place. I drove to campus, because I kept hearing rumors that, apparently, the OU campus has never been hit directly by a tornado. It also has several strong buildings with basements.
As I drove, the sirens began going off. Since these are tested every Saturday at noon, this is normally just annoying background noise, like a mondo vacuum cleaner in the distance. But since the radio and the weather anchors promised all-holy-hell would rain down on our heads from a vengeful wind god (Aeolus?), it took on a robotic, bomb-raid kind of screeching urgency. I churned toward campus and wondered why there were serene Okies sauntering about on the sidewalks. Weren’t they aware of the imminent windpocalypse?
When I got to campus, many others were already huddled on the bottom floors of the library, crowded against the walls, saucer-eyes glued to laptop screens. Some undergrads looked amused, like there was some secret joke we weren’t in on, while the older folks wore faces of protective concern, guiding their dogs about on leashes, herding their offspring to sheltered corners. I found a little corner and squatted there with my friends Jarrod and Rachel, and we all took to the internet, trying to get updates.
I made the mistake of opening the NewsOK.com live severe weather chat function (also used for sporting events!) and freaking everyone else out with random people’s reports from across the state. “Huge tornado headed toward OU!” One dude reported. “An EF5 reported near OKC!” Another exclaimed. Of course, this was exaggerated bullshit, but when you’re in a near panic mode due to the overhyped television coverage, you’re likely to believe concrete blocks were raining out of the sky.
Of course, all of our minds were also on Joplin. Ultimately, a lot of property was destroyed in the state and ten lives were lost, but the single tornado that came close to Norman roped out just before the National Weather Center and just spewed debris on the city:
So...phew. I would still prefer to deal with these things rather than earthquakes though.
Posted by dlashot at 8:06 AM