It recently dawned on me that I have no definite position. On anything, really. I’ve been so against “labels” that I just shrug when someone asks for my position on political matters, I hem and haw when it comes to spiritual enlightenment or on the purported “progress” of humanity and whether it is actually in cyborgish declension.
This doesn’t mean I’m apathetic. Far from it. I just realize that there’s this destructive self-defeating pattern in human thought that we haven’t evolved past yet: Utter Certainty.
In other words, if I have a position on anything, it’s likely to entail this self-generated maxim: “Don’t be too certain about anything. Ideological extremism kills. Like for reals.”
I’ve been fighting the Oklahoma sun’s sweltering calls to bask in vegetable-like postsemesteritis like mad. I’ve been hermiting up and reading about seven books a week trying to discover what I can “call” my theoretical stance. In other words, even though I arguably have “some” time to do fun things, I’ve been using all my time by being more monkish than a temple full ‘o Jainists. Yay for celibacy and meditative enlightenment! 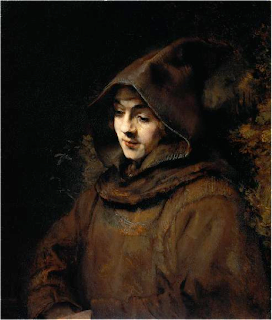 My artist friend painted this. It was easy for him because I didn’t move from this position for a few days. Don’t expect me to engage in lustful acts or talk to other humans in a while, in other words.
I have this tendency to float between the seductive certainty of scientific positivism and the relativity of poststructuralist constructivism. Michel Foucault and Auguste Comte are bare-chested, battle-scarred warriors chucking spears at each other in my head, in other words. One carries the large, weighty weapon of experience-based epistemology and the promise of “progress,” while the other carries the subtly powerful a priori spear (possibly invisible and made of binaries) and mumbles something about “progress” being code for the proliferation of ideological state apparatuses.
My psychology background taught me to adore hard data, no matter how small, obscure or tainted the sample size from which it is derived. Something about numerical precision—the “1” being absent of ontological qualifications or specifications…it is a singular entity that is whole and there is no debate about such matters—is extremely seductive, and I always wondered what it would look like if psychological analyses were applied to research in the humanities. A significant Z-Score from a bunch of extra-credit bribed undergrads taking a subjective questionnaire about their emotional reactions to Paradise Lost, in other words.
Troubling, to say the least. Are we talking about a different field if we incorporate such research strategies into the humanities?
This guy, Jonathan Gottschall, has already answered this question in the negative: http://www.nytimes.com/2010/04/01/books/01lit.html. Indeed, empirical research, as he sees it, is the future of the humanities. It is the sole savior for a sector of academic thought abused by budget cuts and disrespect, he says.
Others, called the adherents of cognitive cultural studies, ala Lisa Zunshine, think that we should incorporate empirical evidence with Derrida and Lacan as another kind of narrative. Not “the” Truth (with a capital T), but “a” truth (little t). One of many, in other words, and maybe not privileged over others.
I’m more inclined to agree with Zunshine more than Gottschall. I’ve come to the determination that I see problems with empirical research outright replacing traditional literary criticism. Art is art for a reason: Its answers can’t be quantified, and it’s probably dangerous to think that we can do so. There’s nothing more grim than a future, at least to me, where something all of a sudden isn’t “art” because it hasn’t fit previous numerical patterns. Sometimes, we should just cease trying to think we can give X=this formulaic answers to everything in human existence. That doesn’t mean we shouldn’t seek likely answers for questions about art, but we should never be dogmatic when it comes to our positions about them.
Empiricism is seductive. I see no reason why I can’t draw on studies from cognitive psychology regarding empathy if I’m analyzing a given text’s treatment of empathy. But when I do so, I expect to deploy at as another kind of narrative that tells a portion of the story.
So…I still don’t know where I “stand” necessarily.
I suppose it won’t matter when all professors are replaced by robots in 2050 anyway, dispensing pre-packaged knowledge nuggets like cashiers at a McDonalds branch.
Posted by dlashot at 2:33 PM