It was good to be home. And I really didn’t want to leave.
Alaska in winter has an ambience that induces the right mixture of sleepiness and calm. Doubtless, the darkness lends it this impression, but there seems a general ocular dimness in air and in biology alike—a hazy, dreamy contentedness. Of course, soporific auras don’t occur unless you’re safely inside, away from the below-zero temps. The landscape, minus periods where Chinook winds turn every street into ice skating rinks and thus energizes the air with howling franticness, seems the living vision of every Chirstmasy cliché, the collective imaginative vapors of every Dickensonian holiday narrative deliverer. There’s a reason the town of North Pole, AK, economically revolves around tourists looking for that authentic Yuletide experience.
Anyway, I’ll suspend my tendency to show off with overly poetic sentences and just tell you all what happened.
The first week, I stayed in Anchorage and mostly hung out with my friends Theo, Julie and Mike. I alternately crashed on each one of their couches and at my mother’s place in South Anchorage. The tail-end of the craziest Chinook storms I’d ever seen hit the state soon after I arrived, and it was probably the most damning proof of global warming I’ve witnessed. Theo and Julie and I went on a short run on the Service High trails and the wind was strong enough to literally recline on. Their tarp blew out of their SUV, sucked past everything, blowing amidst snowdrifts to where it finally rested on a fence about a half-mile away. We also went ice-skating on the frozen Westchester Lagoon, and this was probably my first genuine ice-skating attempt since I was eleven. I think the only reason I fell once was because I had been roller-skating with my friend Brian Hudson all summer, which probably improved my sense of balance.
After seeing my mother and other friends, I hitched a ride down to Kenai to visit my dad with my friend Mike, who was meeting up with his fiancée’s family. This was most likely the last time I would spend in my childhood home, since the house is probably going to be sold next summer. Appropriately, I read a theoretical work by Gaston Bachelard called the “Poetics of Space,” along with several other works.  Reading this book enabled me to “live” the theory, as it were, since it emphasized the memory/spatiality connection as a product of everyday phenomenological awareness. I swear, I thought I was the only person who thought about tight corners and other areas as protective carapaces or physical manifestations of the innate desire for shelter, which facilitate memory almost better than any smell.
Anyway, I went out to several restaurants, gobbled all the Alaskan foods I’ve missed, soaked up the cold and effectively recharged, Mr. Freeze style, after living in the dead center of Satan’s sweaty armpit, otherwise known as Norman. I reconnected with old high school friends that I never should have gotten out of contact with, and will be sure to hang out with again when I come back this summer.
When I came back to Anchorage, there was a medical scare with someone very close to me (won’t mention who), which involved EMTs, ambulances and hospitals and other very scary medicinal things that I’d obviously like to forget. Hanging out with Theo, Julie, Mike and Heather enabled me to forget about it all, which I can never repay them for.
I came back with a little taste of home too: moose meat! It’s honestly among the leanest, healthiest meat in the world. My dad and a few buddies bagged a few moose on the Yukon during their annual trip up there, and were kind enough to send me home with some. I’ll need it to churn through this coming semester.
Also, my cat is very happy I'm back: 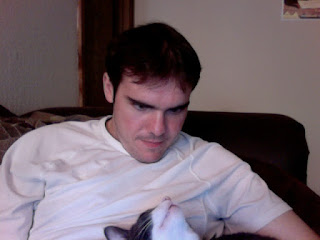