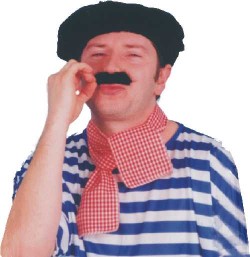 "Uhhuhhuh! Mon écharpe ressemble à un morceau d'une table à manger!
C'est magnifique!"
As is my usual fashion, my procrastination tendencies have brought me here. But I think I started this blog as a way to “productively procrastinate” because if I’m writing about my struggles, at least I’m thinking about a way to overcome them, right? Right?
Right. Glad you agree.
So, for my doctoral program I have to learn how to read two languages, ostensibly so I can translate valuable alien words I run into during my research into the mother tongue. This summer I’ve been (re)learning French. The “re” is in parentheses because I don’t know if my two semesters of French in high school really count, as most of the time we were learning cool ways to insult people. “Tu as un vache grasse” (you are a fat cow), for instance, still sticks clearly in my mind.
Anyway, if I hadn’t been so immature, maybe I would have learned the language by now and wouldn’t have to worry about such matters now. Of course, my juvenile mind would have never predicted that I would become a scholar of anything, except maybe heavy metal and comic books. This, of course, would have occurred naturally.
Alas, I did mature (I think). And now I’m faced with dividing the world in twain in verbal fashion, because of the damned confusing fact that French is a gendered language, and every person, place and thing in the world all of a sudden had fictional genitalia of some sort. This daunting task is also exacerbated by the fact that I have an overactive and possibly hypersexual imagination, and I keep having visions of a French grape (de raisin--male) doing the nasty to a banana (la banane—female). Which, on a symbolic level, doesn’t even make any damned sense. You have the most obvious phallic symbol mother nature ever devised, compounded by the fact that most men still associate a woman eating a banana with…you know, as the female and the grape—squishy, round, filled with, uh, juice--as the male? Lacan is rolling around in his grave. Just so ya know.
Anyway, my translating endeavors are going better than expected, but still slowly and painfully. I remember, enviously, that at one point in high school I had an entire Shakespeare play memorized, yet now I can’t remember 20 new French words in a day. Maybe if they made their language more intuitive, like having obvious genitalia-like fruit become masculine, I wouldn’t have such a hard time.
I guess I shouldn’t complain though—learning to read a language in a couple months is still pretty darned good (If I can do it, and I think I can). And I’m sure others are struggling much more with it than I am.
Posted by dlashot at 12:16 PM